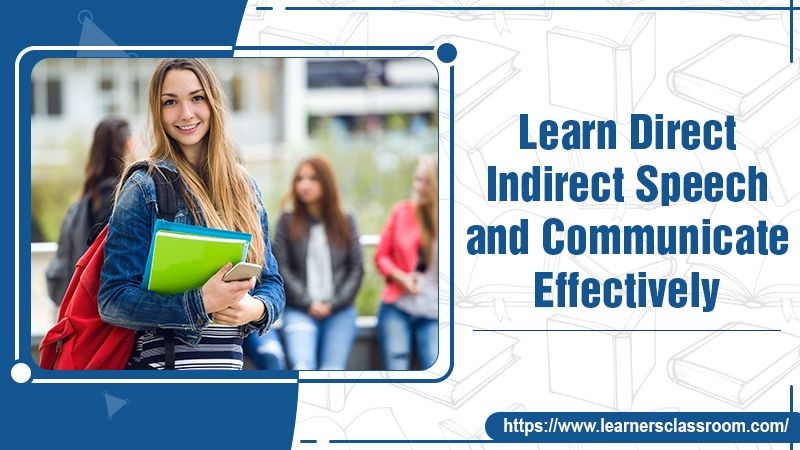 There are multiple occasions where we are required to explain or describe an action or event that occurred. More often than not, it involves repeating what a person has said earlier. To describe what someone said, you can use two different speech types, namely Direct Indirect Speech. When you have knowledge of these two speech forms and how to correctly use them, you can significantly enhance your communication skills in English. Experts at Learner's Classroom define both the speech clearly here with examples.

What is Direct Indirect Speech?

People use direct and indirect speech extensively to tell stories. You use direct speech when you describe what someone is doing or saying. With direct speech, people generally utilize the verb ‘to say.’ But you can also use other verbs like ‘reply’, ‘shout’, ‘ask’, etc.

Indirect speech is used when you desire to report what a person said without using the speech marks or the same words. It is also known as reported speech. You can understand it with the help of the following direct indirect speech examples.

What are Direct Indirect Speech Rules?

Tenses don’t change when the words that are within the quotation marks discuss a universal truth or a habit.

The tenses of indirect speech are not modified when the reporting verb is in the present tense or future tense.

The simple present tense changes to the simple past tense. For example:

Past and future tense

You should change the simple past tense to past perfect.

You’ll not use any conjunction if the direct speech sentence starts with a question word.

If the direct speech sentence starts with a helping verb, the joining phrase should be whether or if.

To make yourself sharp in this grammar concept, ensure that you practice direct and indirect examples with answers.

When you need to change the direct to indirect speech, the changes in modals will happen as follows.

You can understand it with the following direct indirect speech examples.

The first person in the direct speech sentence modifies according to the subject.

The second person of the direct speech sentence modifies according to the object.

The third person does not modify.

The imperative tone in the direct speech modifies into informative in the reported speech.

In exclamatory sentences, you will remove the interjections and make the sentence assertive.

Indirect speech, the spoken words must be in (“) quotes. They should always start with a capital letter. Punctuation marks like comma, exclamation, full stop, or question marks are always put within the inverted ending commas. For example, they enquired, “Can we dance with you?”

In direct speeches, the words expressing nearness in place or time are modified to words that convey distance in indirect speech. For example

It’s important for students to practice lots of direct indirect speech exercises so that they know the right implementation of the rules described above.

Reading short stories and novels is a great way to expose yourself more to direct indirect speech and become fluent in this grammatical concept. Don’t memorize these rules, rather practice exercises of this concept. You will soon get better at it.

Your experience on this site will be improved by allowing cookies.